essays on everything by elise

like, I’m glad I enjoyed this, but wow fuck you guys this broke my heart and the only thing I got out of it was my new favorite tumblr blog

So, uh, it turns out I like Cassandra Clare books now, and I think she’s just improved significantly at creating lovable characters and narratives I personally find compelling, and I am so glad I have learned to love this.

The villain of this book is hate and oppression. The amount of clave-dragging in here…… I’ve been waiting for literal years. And though I think this becomes much more clear in book two, it’s clear from the beginning that hate is about to be the criticism.

“This is why fairies are despised, this senseless cruelty.”
“Careful, boy,” said Gwynn. “You have your laws and we have ours. The difference is that we do not pretend ours are not cruel.”

Lady Midnight follows various characters, most notably including our Forbidden Romantic Plotline, our The Cold Peace Is Terrible plotline, and our Julian Gets Repeatedly Fucked Over By The Clave plotline, but every plotline has a common villain: systematic prejudice.

Also, can I just say: I can’t believe the main villain of this series is a Donald Trump allegory. That’s a blessing.

✔Emma Carstairs – a literal ICON, invented big dick energy
✔Julian Blackthorn – definitely would kill a man for his own selfish motivations but listen… he’s in love with Emma, that’s too relatable and therefore i can’t hate him

I literally love that the main couple of this is a reversed bad boy / good girl who’s maybe turning evil dynamic. It’s this strange dynamic because this author feeds into this trope, and seeing such a conscious subversion of that ideal in her work was incredible. There’s this one line where the female lead is like “oh this is his first kiss meanwhile I’ve slept with like 20 people but that’s okay it’s us” and I was SCREAMING I can’t believe this book killed slutshaming. Anyway, I love this so much I’m obsessed with it.

Also, their relationship is so tense. Like, the mutual pining is too good. Also, please let me just share this meme I’ve been laughing at for three years: 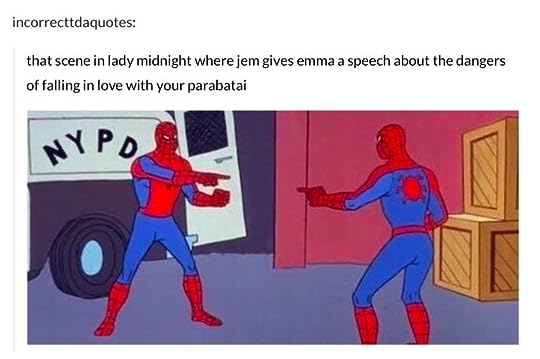 I will actually admit that I did not like Emma and Julian’s dynamic… quite as much in the next book, which I talked about in my review? BUT OH WELL.

✔Christina Rosales – an ICON, a blessing to my life………. I love that she’s close platonic friends with Emma and they never feud, I love how much she asks for herself and how unapologetic she is about her life, I just relate to her a lot and I hope she’s happy forever
✔Mark Blackthorn – my boy, my man, the bi icon we deserved. I actually loved his entire reintegration arc so so so much and I adore that he’s trapped between two worlds but still doing his best to get back within his home. too good we did not deserve him
✔Kieran of the Hunt – did anyone try the chicken? I thought the chicken was lovely. book two Kieran is the superior Kieran and that’s my discourse for the day.

I’m sorry, but if we’re going to talk about Cassandra Clare redoing constructs from her own work in a different way: the three-sided love triangle of Kieran and Christina and Mark. I will not be elaborating on which dynamic this echoes at this time.

In other news, I cried twice during this book, and both times it was about – you guessed it – Mark and Kieran’s backstory!! Kieran and Mark didn’t have to do me like this. [Kieran didn’t have to do anyone like this. INCLUDING ME that line where he was like “I cannot bear it” Kieran can’t lie he’s not lying he literally means that I fucking hate this.]

✔Diana Wrayburn – genuinely one of my favorite characters from this series and i have NO IDEA why she’s so slept on. i mean, it’s not like anyone hates her, but i would like you all to be screaming about Diana for 40 hours per week as i do? this is a full-time Diana love zone. i love my canonically trans wife
✔Taavy Blackthorn – he’s ten and i’m pretty sure ten year olds don’t have personalities. pure.
✔Dru Blackthorn – I would fucking die for Dru she’s too legendary. also, she’s plus-sized and the narrative is so good about it.
✔Livvy Blackthorn – a small bean doing her best and it’s just not very good.
✔Ty Blackthorn – it is really, really depressing how few books I know of have canonically autistic characters who are not essentially used as jokes, but here we are.
✔Kit [Herondale] – chaotic bisexual. i have a tumblr post to share about this involving the phrase “token straight family member” but unfortunately, spoilers. [what is up with this whole plot twist about someone being a Herondale motif.]

In case you haven’t noticed, I love the Blackthorn family.The dynamic of the siblings with Julian is absolutely the best, and their mutual love and support for each other means so much to me.

“You pointed a knife at me.”
“It wasn’t personal.”

Soooooo, Ty and Kit had two separate meet cutes in this and both of them were the best thing I’ve ever read. They definitely get more development in book two, but Kit’s joining-the-Blackthorns arc, even here, was absolutely the best. Basically, I really wish I could continue to be emotional about the Blackthorns forever.

I think we all know Cassandra Clare is really into the overlaps between worlds, and I’m honestly… here for it. Jace and Clary’s cameo is the most I’ve liked them in the entire canon of the universe. Jem and Tessa showed up for three pages and it was my favorite thing I’ve ever read. There was some line about the Carstairs “owing the Herondales” and I feel like that’s the exact opposite of TID canon but okay?

[also, I know I’m a bitch, but Tessa and Jem were not in book two, and I think that makes it a bad book, personally]

ANYWAY, the point is, I really enjoyed this book, and so far I’m really enjoying this series. I hope I will continue to not die of sadness!!

Have you read Lady Midnight? Are you interested? What are your favorite books by this author, because honestly I have very varied opinions on her books? Let me know in the comments!

This user’s name is Elise, and she is awful at writing bios. She likes weird and/or vaguely gay books, reads so many things that most of her reviews are only on Goodreads, tweets about music a lot, and just has a lot of feelings about Inej Ghafa.

likes: moral ambiguity, narratives around trauma, middle books, rereading, reducing every book to being about Personal Agency
dislikes: sexy bad boys, people not letting her Have Opinions, the romance-curing-abuse trope

happy 2020 and some news I suppose! I’m coming back to this account and book blogging, officially. in the midst of two things that happened in 2019—some intense family issues in the first half, and my first semester at college in the second—I lost a lot of my passion and motivation for book blogging. I’m in a different place now, thankfully! And though my 2019 was honestly very good in a lot of ways, this was something I missed. Excited to be back and love you all!!
I’m back!! my January book haul is up on my blog – go check it out! https://thebookishactress.wordpress.com
August wrap-up posted on blog!! 😊😊
here’s everything I read this month! I still kind of can’t believe I read the entire Broken Earth trilogy, lol. let me know if you’ve read any of these + your thoughts down in the comments!
I think I got more books in June than I got the entire rest of the year put together and I only bought like five of them what is happening #bookstagram #books #bookhaul
my two current reads!! what are you guys reading right now? 💚 #books #bookish #bookstagram